The behaviour of a chemical in the water heavily influences its fate in the marine environment over the days, months and years following its release. In most cases, a substance does not have one single behaviour but rather several behaviours.

Gases (G) and evaporators (E) disperse into the atmosphere.

Floaters (F) spread across the surface to form a slick. Then, under the action of waves and currents, they form aerosols or split up into smaller and smaller patches and/or form an emulsion with seawater (emulsification), or are sometimes even naturally dispersed. They can also undergo oxidation• when exposed to the sun's rays (photolysis).

Dissolvers (D) will be diluted in the water column•, leading to a drop in their concentration, therefore reducing their effects. They can then be broken down by sunlight (photolysis) or by micro-organisms (biodegradation). They can also sometimes cling onto organic or mineral particles in suspension (adsorption) or can gradually accumulate in living organisms (bioaccumulation•).

Sinkers(S) will initially settle on the bottom. They can then be buried by sediment movements or be returned to the water column (dissolution).

Mercury• can be found in three forms: metallic, ionic and organic. It is most toxic in its organic form and accumulates throughout the food chain (see "Japanese tragedy in Minamata", p. 30). In polluted areas, when it is present in seawater, mercury is taken up by plankton. It is then found in the flesh of small carnivores that feed on this plankton then in large predators such as tuna. Humans, as the final consumers, end up consuming fish with a high mercury content. 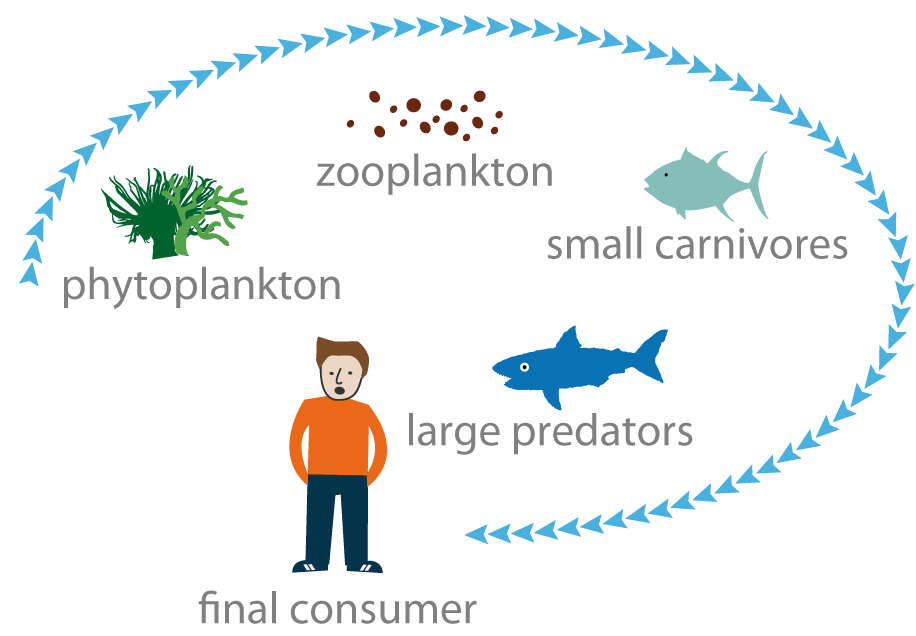 The negative effects of chemicals on the environment are gathered under the term ecotoxicity. This may be direct or indirect.

Direct ecotoxicity can result in:

Chemicals also have indirect effects on the environment which are reflected in populations and not only in individuals. The ecosystem's structure and productivity can therefore be disturbed. This can for instance result in changes in terms of dominant species and in a decrease, or even loss, of biodiversity. Chemicals also affect all links in the food chain, from the smallest (plankton) to the largest (whale).

In addition to the monitoring program that is often set up during response, follow-up can be conducted in the longer term (over several years).

Measurements in the air and water and sediment samples can be taken on site, as determined by a pre-established sampling plan, in order to study the evolution of the pollutant in the environment. This will indicate, for example, whether the pollutant has begun to dissolve in the water column once again after having first settled on the bottom. A fishing ban may be issued until the situation has improved sufficiently.

The other method of monitoring pollution is to use bioindicators, i.e. species (plant, animal or microorganism) that provide information on the health status of a given ecosystem. Mussels and oysters have been frequently used for many years now to detect the presence of pollutants such as heavy metals in the marine environment.

For further reading on bioindicators see the following page on the US Environmental Protection Agency website: http://water.epa.gov/

The Mosselmonitor®, an example of an experimental system using bioindicators

The Mosselmonitor® was designed by a team of Dutch researchers. This experimental system can be used to detect aquatic pollution using mussels as bioindicators. In normal conditions, mussels open to filter water. In a polluted environment, they close their shell, but very frequently open and close to “taste” the surrounding water and determine whether the pollution is still present.

The Mosselmonitor® is a plastic cube in which eight mussels are placed. A small electromagnetic frequency sensor, attached to each valve, is connected to a recorder that centralizes the results. The system indicates the presence of aquatic pollution when the opening and closing (flapping) of the shells is rapid.

Shell gape recordings of 8 mussels placed in the Mosselmonitor® 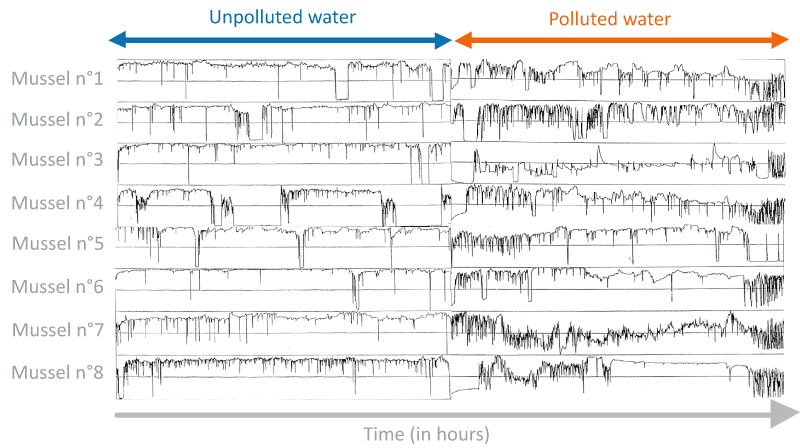 Animal communities affected according to the chemical's behaviour