Particular attention is paid to the transport conditions of HNS as they are often liable to react, sometimes violently, with other products or upon contact with an element in the environment. This danger is even greater if the optimal transport conditions determined (temperature, pressure) are accidentally altered. 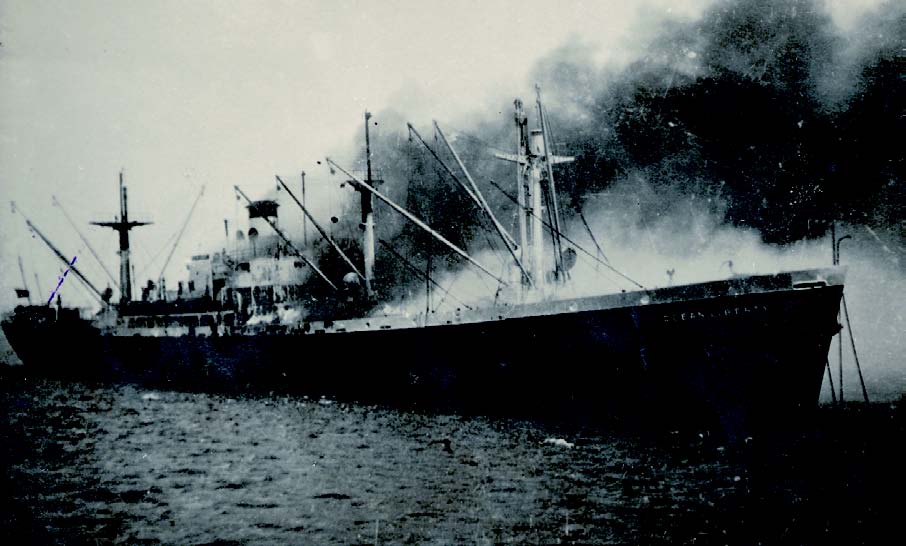 Explosion of the Ocean Liberty (1947, port of Brest, France)

Certain substances can react with water through different processes: hydrolysis•, hydration• or oxidation•. These reactions• can cause an explosion or lead to the formation of dangerous products (corrosive•, toxic or flammable).

In 2003, the deoxidized iron balls contained in the tanks of bulk carrier Adamandas reoxidized in the presence of excessive humidity in the air. This caused the cargo to heat (up to 300°C) and dihydrogen to be released, leading to an explosion risk.

Reaction with the oxygen in air

Certain gases or volatile substances can react with the oxygen present in air and ignite or explode. Their Lower Explosive Limit (LEL) and Upper Explosive Limit (UEL), which determine the concentrations in air allowing these reactions, must therefore be known.

LEL and UEL of ammonia

Monomers• are generally stable substances but can react with each other in an uncontrolled manner to form polymers•, which may cause violent explosions. To prevent this, an inhibitor is often added to monomers, in particular for their transportation. Polymerization is a highly exothermic reaction and can be triggered by different factors: a rise in temperature, inhibitor expiry date exceeded, friction or shock.

In 2000, the chemical tanker Ievoli Sun sank in the Channel with 3,998 tonnes of styrene onboard. Several experiments were conducted to determine whether the cargo was liable to react violently. As the results did not show any polymerization risk, the styrene was pumped out of the wreck.


Reaction with other substances

Certain substances are incompatible with each other and legislation requires them to be kept far apart during transportation. If they accidentally come into contact, this may cause fire, explosion or the release of toxic vapours.

In 1977, when loading the cargo vessel Burgenstein, in Germany, sodium peroxide• was spilt onto wet plastic sheeting. The substance reacted violently with the damp
plastic, causing a fire.