Response to containers and packages 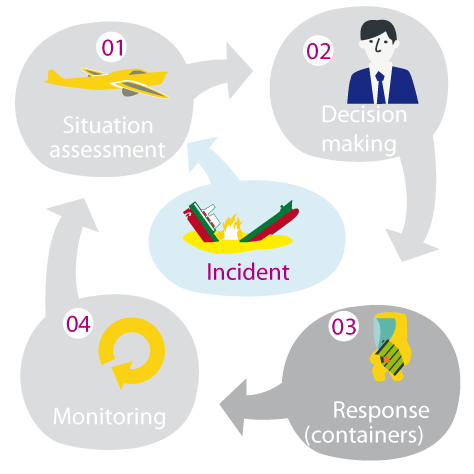 Containerized cargoes, whether onboard the vessel or lost overboard, require efficient information transfer and seamless coordination between the authorities on land and the resources on site.

If containers• and packages are lost at sea, search operations are carried out to locate them as they may pose a hazard for shipping traffic and the environment, and even for nearby populations if they are washed up on the shore. They may float at the surface, be submerged or even sink.

Initially, computer software can be used to model the drift of containers and packages to determine the area in which they are most likely to be found. Meanwhile, the search for objects at the water surface is conducted visually or using side-looking airborne or shipborne radar. Sunken containers sitting on the bottom can be detected using vessels equipped with sonar•, magnetometers• or even ROVs• equipped with underwater video cameras. 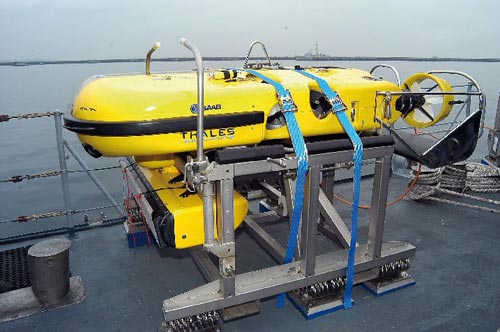 Response techniques when the cargo remains onboard

Containers and packages located onboard a grounded ship can be transhipped as long as the risk for response teams is controlled. This type of operation reduces the risks of subsequent response operations and lightens the ship in order for it to be removed from the accident area (by being refloated or cut up then towed away).

In 2007, the container ship MSC Napoli,caught in a storm in the English Channel, suffered a leak then a steering system failure. After having lost containers at sea, the vessel was towed then beached on the English coast. All the containers remaining on board (over 2,000) were removed by two barges equipped with giant cranes, able to lift up to 500 tonnes. 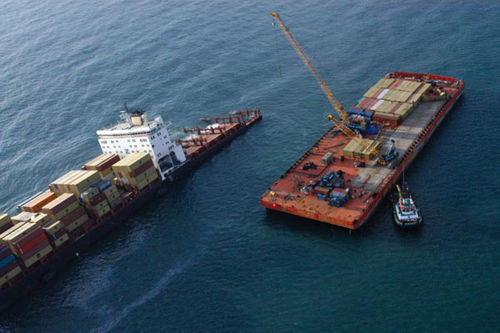 Response techniques when the cargo has been released

Recovery at the surface

Once the risk has been assessed and controlled, floating containers and packages lost overboard can be attached to cables known as slings and towed to a place where they can be safely handled.

Non-hazardous containers can be winched and hoisted aboard at the rear of the vessel. This type of operation requires a support boat as well as divers to attach the cables to the corners of the container.

In 2002, the container ship Lykes Liberator lost three tanks of chemicals off the coast of Finistère (France). To locate them, overflights were conducted and drift modelling was launched simultaneously. Once they had been found, the tanks were towed to the port of Brest. 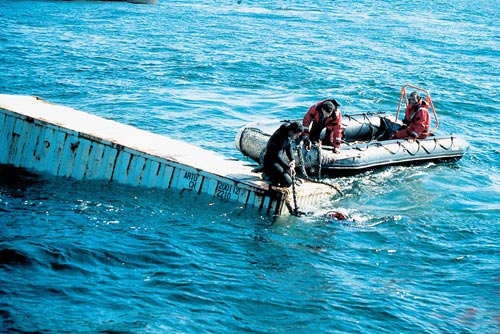 Attaching a sling to a container floating at the surface

Recovery on the bottom

Containers sitting on the bottom can be recovered by divers protected with appropriate equipment or using ROVs. 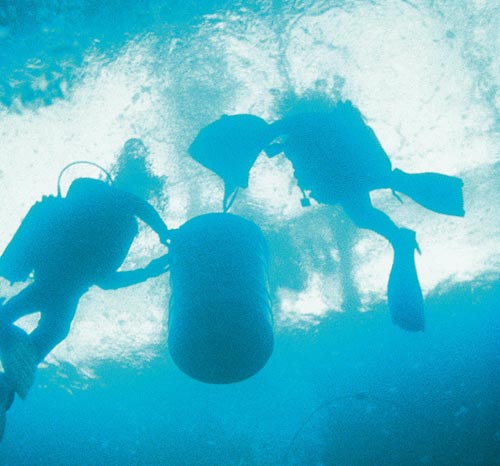 Abandonment on the bottom

If there is no risk of pollution, a containerized cargo may sometimes be abandoned on the bottom, if it is not liable to disturb fishing activities.

In 1989, the container ship Perintis sank in the English Channel with its cargo, which included 8 tonnes of pesticides in drums•. Within 6 weeks following the accident, most of the drums had been located on the bottom. It was decided that they would be left there. As this pesticides had low solubility in seawater, in the event of a leak, only a small area was expected to be affected.

Rather than being recovered, containers may be destroyed in a controlled manner using explosives.

In 1979, the cargo ship Sindbad, sailing off the coast of the Netherlands, lost 51 one-tonne cylinders of chlorine in the North Sea. Recovery operations on the bottom were launched but only a small proportion of the cargo was brought to the surface. Five years later, a new strategy was adopted as the cylinders had been too corroded by the seawater to be handled. They were located on the bottom using sonar and ROVs, then explosives were placed on each of the cylinders by divers. The cargo was then destroyed in a controlled manner. At the surface, traffic was suspended until the gas had dispersed.

Recovery on the shore

If they do not sink and are not located and recovered, floating containers may wash up on the shore. If the cargo is hazardous, the area should be cordoned off and public access prohibited. In the case of a very high risk, the evacuation of nearby populations may need to be considered. Response teams can then neutralize the risk on site or transport the container to a safe area.

On the night of 1st to 2nd January of 2019, as a storm waged, one of the world’s largest containerships, the MSC Zoe, lost around 345 containers overboard in the German waters of the North Sea. Two of the containers were carrying potentially hazardous substances: 280 bags each containing 25 kg of organic peroxide powder, and 1,400 kg of lithium ion batteries. A warning was issued to ships travelling through the affected area as to the risk of colliding with containers. The contents of certain containers washed up on the beaches of the Wadden Islands: carparts, toys, flat-screen televisions, light bulbs, furniture and high density polyethylene, mainly used for manufacturing plastic packaging, in the form of granules. Several bags of peroxide were found north of the Dutch coastline, indicating that the container had burst open. Shoreline clean-up operations began very quickly by professionals. On the 9th, MSC announced that 1,200 tonnes of debris had been collected. A coastguard plane conducted over flights above the Wadden Islands to monitor the situation and attempt to locate the containers. From the 6th, ships equipped with sonar searched for the containers lost overboard and recovered them, assisted by other vessels, in mid-January. Some containers had been ripped open and their contents had sunk.