Response techniques when the cargo has been released

Reducing the vapours emitted by evaporators

In port areas, two techniques may be employed to reduce evaporation and restrict the spreading of vapours. The first involves reducing vapours using water spray curtains, which dilute the toxic cloud, reduce the concentration of gas and limit the size of the danger area. This is effective on hydrophilic• products. The second technique involves spreading a
layer of foam over the pollutant to reduce its evaporation rate.

Example of water spray curtains set up in series 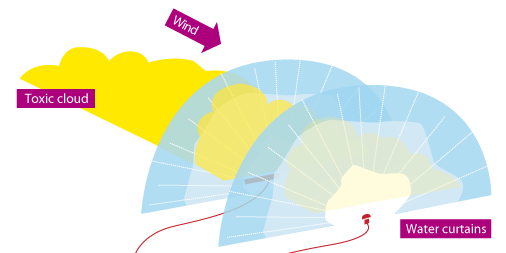 In 1976 in the port of Landskrona (Sweden), a pipe burst when unloading a cargo of anhydrous ammonia• from the gas carrier René 16. A vast cloud enveloped the ship and drifted towards a shipyard. The response team used water spray to
reduce and dissolve part of the gas cloud and to protect the operator in charge of closing the valve above the leak point.

Containment and filtration of dissolvers in water

When a soluble substance is spilt in a port or harbour, it is sometimes possible to contain the pollution by shutting off the doors of a drydock facility or the sluice gates•. The pollutant can then be treated using mobile truck-mounted units. These units are composed of high flow rate pumps which send the polluted water through large filter cartridges that retain the pollutant.

Some information on the use of activated carbon to filter wastewater:
www.lenntech.com/library/adsorption/adsorption.htm

In coastal or port areas, sinking substances can be recovered on the bottom by dredging. This mud and sediment mechanical a excavation• technique is implemented by vessels or a barges• equipped with a a dredge• which may simply consist of buckets or be fitted with pumps. The waste collected is loaded onto the vessel to be treated in specialized centres on land. 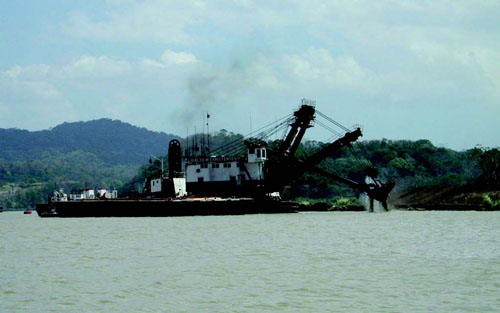 Dredging of the Panama Canal

In 1973, while the Amalie Essberger was unloading molten phenol from a tank in the port of Gothenburg (Sweden), the tank burst and 400 tonnes of phenol were spilt onto the dock and into the water. Analysis detected the presence of large clusters of solidified pollutant on the bottom. These clusters were brought to the surface using a dredger•.

Containment, recovery and dispersion of floaters

The response equipment used for persistent floating products (vegetable oils and viscous chemicals) are inspired by those existing for oil pollution, but are preferably made of materials resistant to the chemicals in question.

Containment and recovery: when floating substances form a sufficiently thick and continuous slick, they can be contained by deploying floating booms then recovered using a skimmers• if the sea and weather conditions allow. 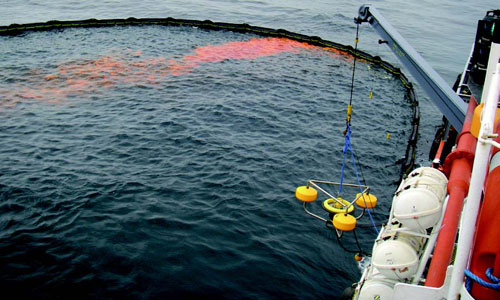 Containing palm oil with a boom and recovering with a skimmer

Dispersion: dispersants are products which speed up the natural dispersion of pollutants in the water column, by taking advantage of wave agitation. They help to fragment slicks into a multitude of microdroplets spread throughout the water column, which speeds up their breakdown and bioassimilation in the marine environment. Because of dispersants'
mode of action, their use is regulated. They should not, for instance, be used in areas where dilution levels are too low.

Trawling: if the pollutant is a paste, it can be recovered offshore using trawl nets• towed by a single or pair of vessels.

In 1997, the Allegra lost 900 tonnes of palm nut oil following a collision with a bulk carrier in the English Channel. The oil rapidly solidified to form a surface slick. Part of the oil was recovered offshore by trawling.

Sorbents: these products can be used in coastal or port areas on small-scale spills. They are solid materials used to retain floating substances by sorption, in order to facilitate their subsequent recovery.

Operational Guide "Use of sorbents for spill response".

On land clean-up: when large quantities of vegetable oil agglomerates are washed up on difficult access sites (riprap•, pebble beaches), manual recovery is necessary. If the areas affected are sandy beaches, specialized equipment such as sand screeners• can be used.

When the oil on the shoreline is liquid, the area can be cleaned at low tide by flushing• with cold water. The effluent• is recovered and settled, before pumping off the oil.

Example of response in inland waters

Response operations are also conducted in the case of chemical spills in inland waters•. In 2008, a truck transporting 33.6 tonnes of concentrated phenol veered off the road and spilt part of its cargo into the Zhesang River (southern China). The pollutant quickly reached a dam located 15 km upstream of a water intake supplying drinking water to 200,000 people.

The local authorities banned over 1,000 households in the city of Yangyu from consuming the potentially polluted water supply. Response teams built makeshift dams to contain the pollution and spread lime and activated carbon• to capture as much pollutant as possible.