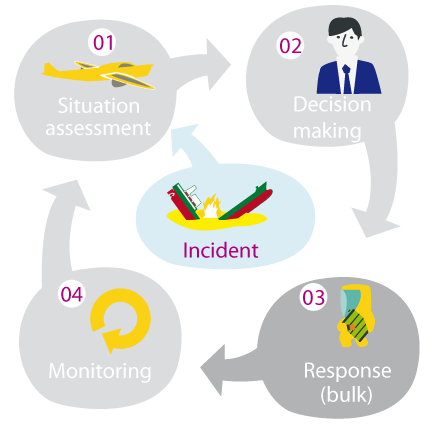 The choice of response strategy is essentially dictated by three criteria:

Varying degrees of response may be required: prevention measures, monitoring of the spreading of the pollution and/or clean-up actions.

As the situation may evolve very quickly, the chosen strategy must be adjusted according to the reality in the field.

Decision support for response to spills of bulk HNS cargoes 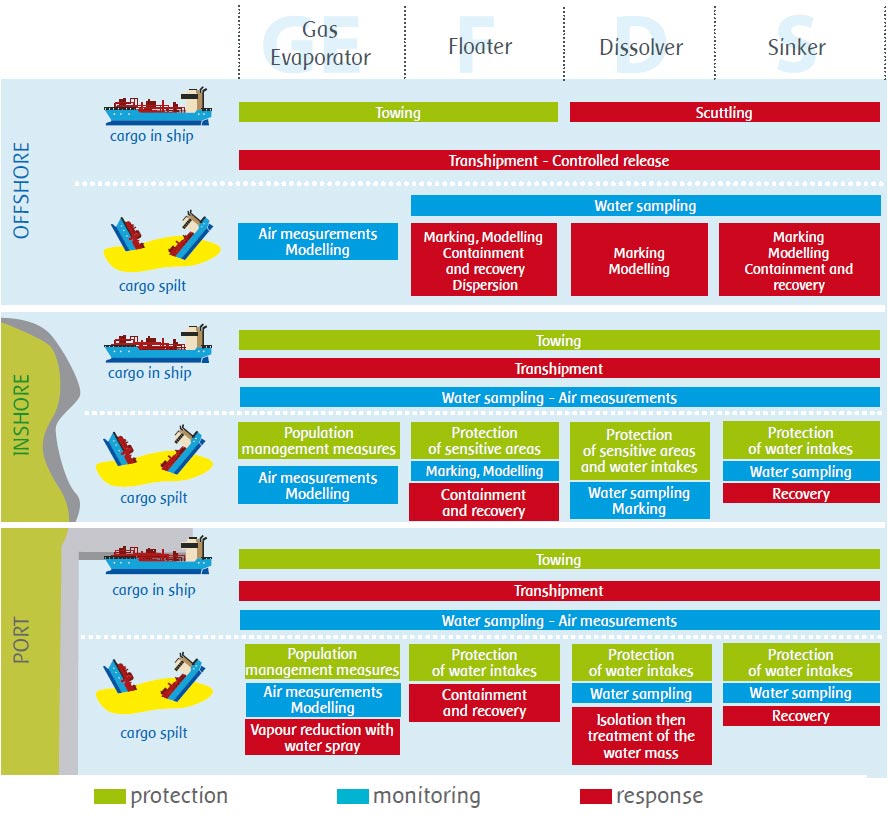 When a vessel carrying HNS is in difficulty offshore, it may be towed to a place of refuge, i.e. a place where the situation can be stabilized while minimizing the environmental impact. On the other hand, if the incident occurs in a coastal or port area and the cargo onboard the ship presents too high a risk for nearby populations, it may be towed offshore to be lightered• or even scuttled•.

In 2012, in the Persian Gulf, the chemical tanker Stolt Valor, carrying hazardous substances, suffered an explosion followed by a fire which lasted 5 days. The vessel in distress was taken in tow and was in search of a place of refuge. Three countries denied the tanker access to one of their ports: Qatar, Saudi Arabia and Bahrain. Obtaining access to a place of refuge for a vessel in difficulty is a problematic issue. Finally, Saudi Arabia granted the Stolt Valor permission to anchor off its coasts. Once the cargo of hazardous substances had been transferred, the wreck was towed away and dismantled.

Generally speaking, an exclusion zone is defined around the vessel prohibiting shipping traffic, fishing and overflights in the hazard area. If the substance spilt is a gas or an evaporator, it may form a toxic cloud which presents a danger for nearby populations. In this case, computer modelling provides valuable information on the dispersion and movement of the cloud
of pollution, helping to determine the measures to be taken in terms of local populations.

If a floating substance is spilt in a coastal area, floating or filter booms resistant to the pollutant must be deployed. This will protect ecologically or economically sensitive areas such as ports, fish farms, marshes and bird reserves. 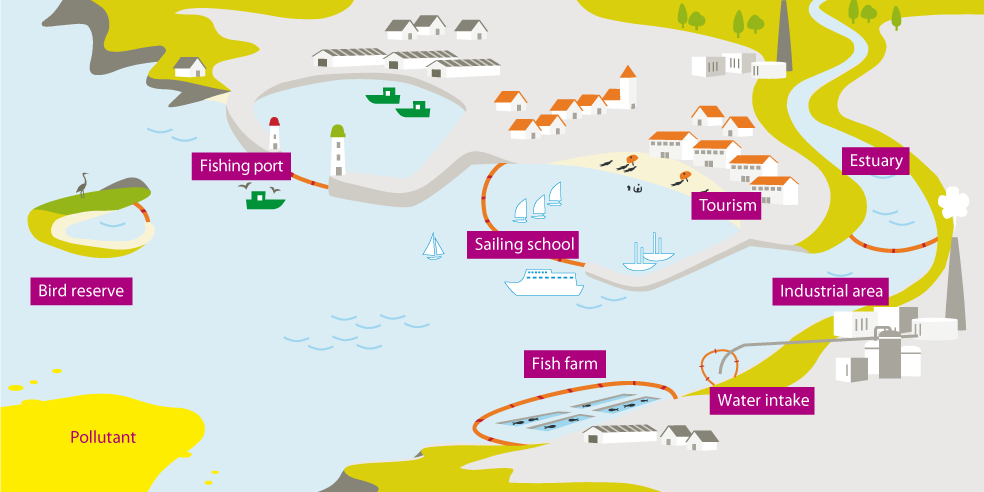 If the spill occurs in a coastal or port area, one of the priorities will be to protect water intakes to prevent the pollutant from entering sites or installations that use seawater (fish farms, factories). 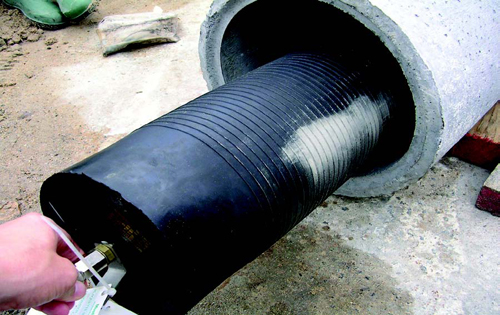 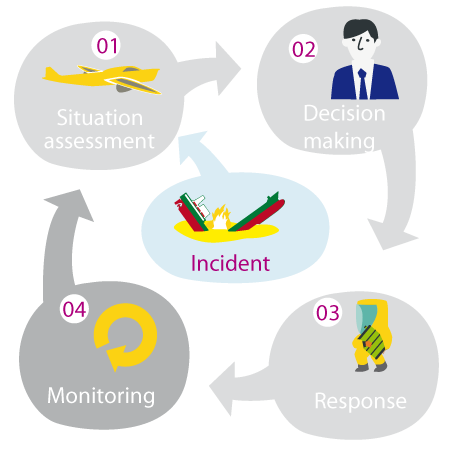 It is important to monitor the pollution in order to track changes to the situation and adjust the response strategy if the initial approach proves to be ineffective or inappropriate. The transfer of information to response coordinators is a key stage.

Together with marking, computer modelling performed during the risk assessment is used to monitor the pollution throughout the response phase. Through modelling, hazards for operators can be predicted and optimal response conditions can be ensured in the case of a release of gases or evaporators. 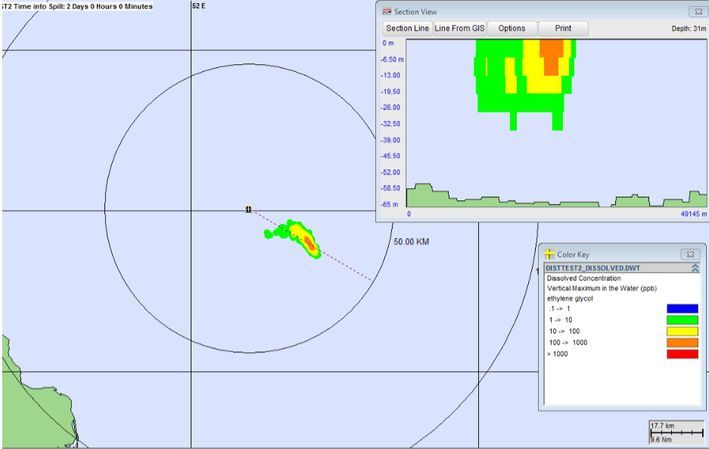 CHEMMAP software: view of the concentration of a chemical dissolved in marine water

Generally speaking, when a non-floating chemical is spilt or liable to be spilt, the response options are rather limited, especially in the open sea.

Seawater sampling in the area of the Ievoli Sun incident (2002, France)

When the Ievoli Sun accident occurred in the English Channel in 2000, a cargo monitoring system was set up as small leaks of styrene, a hazardous floater/evaporator, were detected from the wreck.

Air and water samples were taken around the vessel and regularly analysed for several months by the French Navy laboratory in Cherbourg. Ifremer• also implemented a sampling plan to monitor the quality of the marine environment (water column and living organisms). The different analyses conducted did not show any contamination by styrene.

Meanwhile, during the first weeks following the accident, the Marseille Navy Fire Department and a Civil Protection Unit set up a network on land to detect styrene vapours in the atmosphere, giving rise to negative results.

The pollution should be monitored via air measurements and water, sediment and/or living organism samples. These actions follow on from the analyses performed during the initial risk assessment phase.

It is often difficult, or even impossible, to observe a chemical pollutant spilt at sea. It is therefore essential to mark the pollution so as to identify it more easily, to monitor its movements and to regularly update drift• predictions.

In coastal areas, certain dyes (organol red, fluorescein) can be used to track the movements of invisible
pollution. 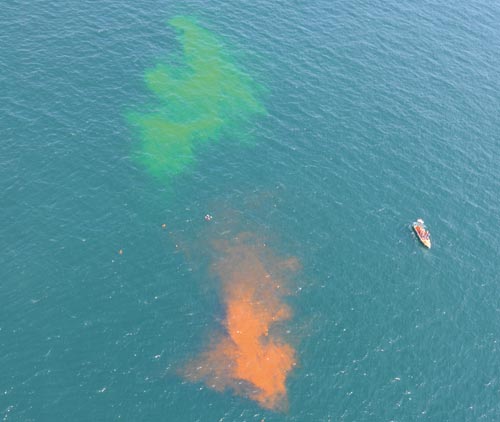 However, there are two limiting factors: marking can rarely be carried out at the beginning of the spill and the behaviour
of the dye is not always identical to that of the pollutant. We therefore refer to the probability area where the substance spilt is likely to be found.

The slicks formed by floating products can also be identified using marker buoys deployed from an aircraft or a vessel. These buoys can then be located via different systems (satellite-tracked buoys, GPS• buoys).

Response techniques when the cargo remains onboard

When a ship is grounded, on a reef or sand bank for example, in order to refloat the ship its cargo must often be transhipped• to make the ship as light as possible. In the case of a wreck that has sunk with its cargo, the pollutant may be removed by pumping it to a surface vessel.

In 1996, the gas carrier Igloo Moon ran aground south of Florida. Due to the shallow waters, the fuel was first pumped out, then 15 % of the cargo of liquefied butadiene was transferred to another ship: Selma Kosan. The ballast• water was discharged into the sea following decontamination. It was not until after these lightering operations that the Igloo Moon could be refloated. 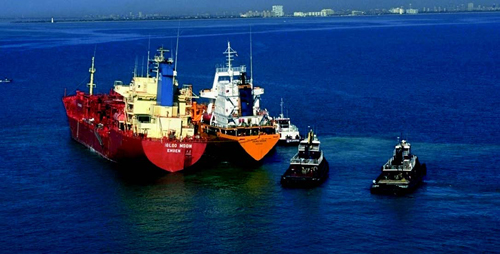 Lightering of the Igloo Moon (left) by the Selma Kosan (1996, Florida)

If the product entails only a low risk for humans and the environment, it may be possible to release it into the environment in a controlled manner, thereby diluting it in a large quantity of seawater. This technique must not be used in coastal or port areas, as dilution is too low and the risk for populations too high.

In 2000, the chemical tanker Ievoli Sun sank in the English Channel, in waters 70 m deep with its cargo of 3,998 tonnes of styrene, 1,027 tonnes of methylethylketone• and 996 tonnes of isopropyl alcohol•.

In order to define the most appropriate response strategy, experiments were conducted, mainly by Cedre, on the styrene from the Ievoli Sun. These experiments showed that this product, which is dangerous for the environment, did not present a risk of sudden polymerization. Pumping operations were conducted.

The methylethylketone and the isopropyl alcohol, which are soluble substances that are totally biodegradable• and have little environmental impact, were released in a controlled manner into the environment.

The treatment of the wreck of the Ievoli Sun required the assistance of a remote-controlled underwater robot which was used for subsea observations and to drill holes in the hull to enable pumping and controlled release of the cargo.

Taking a more radical approach, it is possible to consider sinking the cargo offshore, if it is too dangerous to allow intervention. This solution involves scuttling• the vessel. 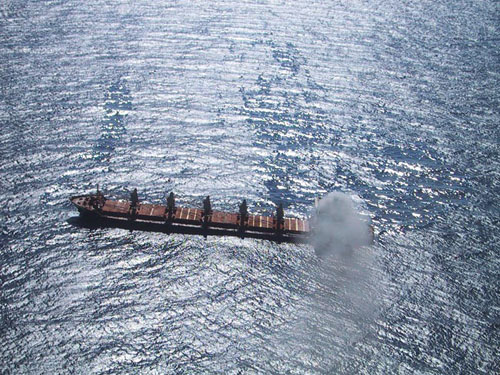 In 2003, the bulk carrier Adamandas, at anchor near a port on Réunion Island, turned into a potential bomb due to the rising temperature of its cargo (up to 300°C) together with the release of dihydrogen. The French authorities decided to scuttle the vessel using explosives, 20 km off the coast.