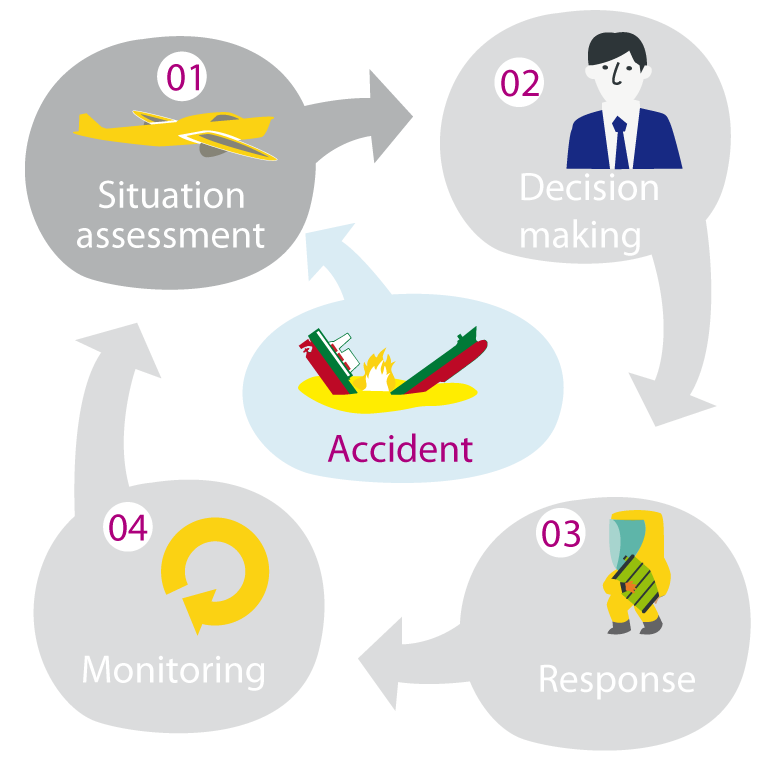 Initially, it is important to acquire full knowledge of the situation in order to be able to assess the consequences of the accident as accurately as possible.
The authorities will seek to obtain information on:

This type of information can be collected from different sources: the crew, reconnaissance teams, the ship owner, ship manager and insurer, the charterer•, the ports of origin and destination, the cargo owner, the product manufacturer, the local authorities and certain websites.

Captains of all container ships carrying hazardous materials must have in their possession a document known as a manifest which lists all hazardous materials onboard. It is a key document that must be kept in a determined and known location, near the bridge and immediately accessible to the captain. This document should include information such as the proper shipping name of substances (provided by the IMDG code), the position of the containers• containing hazardous materials and the description of the packages within these containers (number, weight). Manifests, however, sometimes contain vague, incomplete, illegible or even unreliable information. 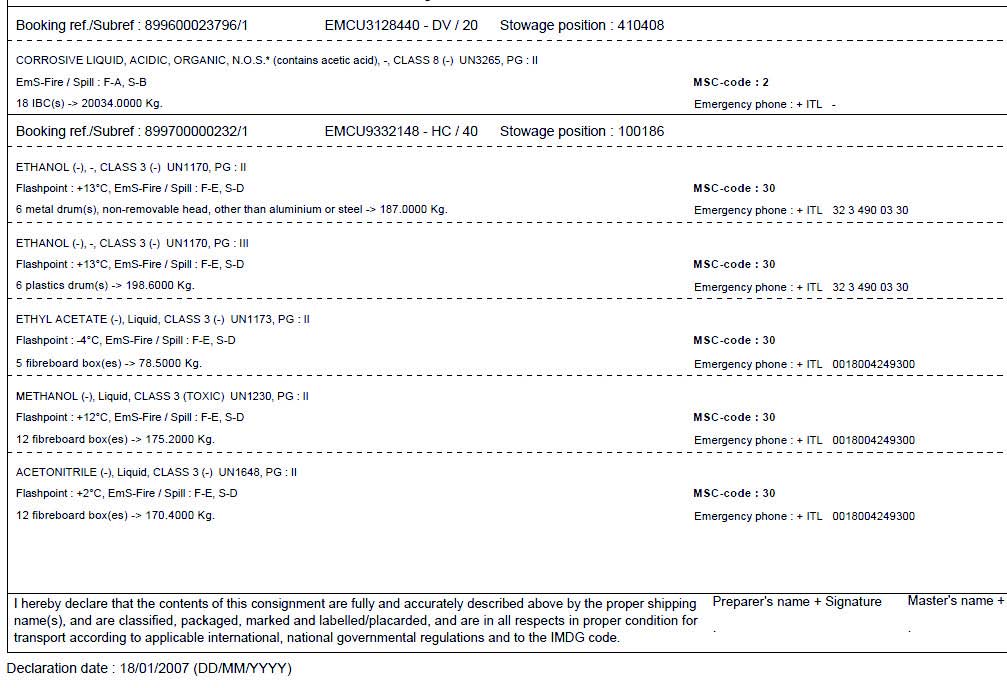 The gathering of information often occurs concurrently with detection of the pollution.

In the case of HNS, visual or olfactory detection can rarely be performed as many chemicals are colourless and odourless. A set of technologies gathered under the term remote sensing• can be used.

For floating substances, specialized spill response vessels and aircraft• can be equipped with radars and sensors to detect different types of signals: microwave, infrared, ultraviolet and fluorescent radiation. The analysis of satellite imagery can also contribute to detection. 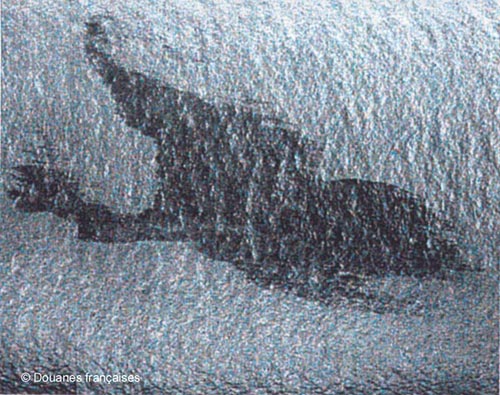 Slick of palm oil observed from a plane by remote sensing

Wherever possible, assessment teams or drones• are often sent into the accident area to identify the type of pollutants but also to determine their location and behaviour. The spill response teams must be equipped with PPE• adapted to the situation. 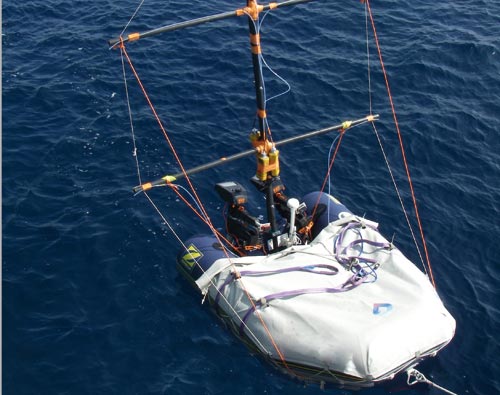 These human operators or remoteoperated vehicles are responsible for taking measurements in the water and air. Different types of apparatus can be used to determine whether there is a risk of variation in pH (pH meter), explosion (explosimeter), asphyxiation (oxygen meter) or intoxication (toximeter, photoionization detector•). 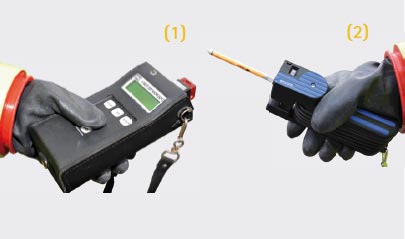 Meanwhile, an initial series of samples of the product(s) spilt, either alone or mixed with seawater, is taken and analysed onsite with ready-to-use reagents. These reagents are specific to a given product and may require several different trials
before resulting in the identification of a pollutant.

There is no system able to analyse all types of vapours or liquids currently available on the market. 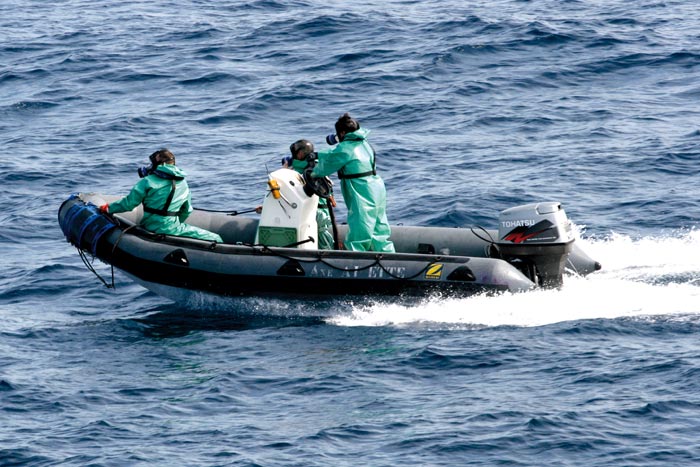 The results obtained from these first measurements and analyses provide a better understanding of the situation and help to determine the emergency measures to be taken.

A second series of samples should be collected and sent to the laboratory to more accurately determine the pollutant concentrations in the water column• and the atmosphere. Studies to determine the fate of the pollutant in the environment should also be conducted.

Several parameters come into play in risk quantification. The first to be considered is the accident area. In the case of an incident in a port area, for instance, with populations in the vicinity and industrial plants with water intakes in the area, the situation is quite different to that of a incident in the open sea.

When the type of pollutant is known, data on its reactivity and behaviour must be obtained as rapidly as possible, bearing in mind that these data are the result of laboratory experiments which therefore do not take into account the environmental conditions in the accident area. The reality in the field may therefore be entirely different.


In 2012, the container ship Eline Enterprise was in difficulty, having been caught in a storm off the port of Darwin, in Australia. The ship was transporting containers of ethylene in gas form, an extremely flammable colourless product. Ethylene began to leak as a result of containers becoming dislodged in rough seas. Furthermore, the Eline Enterprise had steering problems and was at risk of grounding at any time. The ship found a place of refuge and a safety zone for air and maritime traffic was immediately established. The incident came to a close one month later and no damage was ultimately reported. 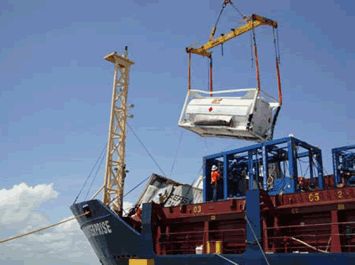 When defining the response strategy, it is crucial to anticipate the evolution of the situation. To do so, computer modelling is a valuable tool. It can be used to predict the behaviour of a product for the coming hours, or even days, taking into account a certain number of parameters (marine currents, wind speed and direction, air and water temperature, type
and quantity of product spilt). It should therefore be launched as soon as the first information on the situation is available.

Several software programs for modelling HNS behaviour are available on the market. Simple programs which focus on a specific aspect, such as the identification of areas potentially threatened by a toxic cloud, also exist.

In 2012, the German-flagged container ship MSC Flaminia suffered a violent explosion followed by a fire, the cause of which remains unexplained. The ship was carrying 2,876 containers, of which approximately 150 contained hazardous substances. Several of these containers fell overboard. Before considering letting the MSC Flaminia enter a European port, the experts had to ensure that there were no further risks of explosion or fire, in particular in relation to the cargo, and that the container ship's structure could withstand towing. The ship arrived in the port of Wilhelmshaven in Germany almost 2 months after the incident. The treatment of the 20,000 to 30,000 tonnes of contaminated extinguishing water and the unloading of the ship's cargo then began.

ITOPF technical paper « Response to marine chemical incidents ». This paper provides an introduction to the issues involved in responding to chemical spills and addresses the range of hazards present, the behaviour of chemicals when spilt at sea and briefly reviews available response options.