When travelling from their production site to their final destination, chemicals transit through ports where they are stored, packaged and loaded onto vessels.

Ports are divided into several distinct terminals, each specifically dedicated to the handling and storage of a particular type of cargo. The size and specialization of the port determine the presence and extent of these different terminals.

Transporting a chemical in gaseous form is not costeffective as its volume is far too great. To resolve this problem, gases are liquefied by maintaining them either at very low temperature or under pressure, according to their critical temperature•. 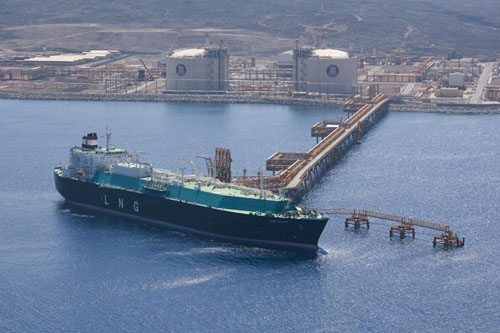 Certain ports are equipped with liquefaction• plants where gases can be transformed into liquids then transported by insulated pipes to storage tanks. Liquefied gases are transported to the loading dock through above-ground pipes. These pipes are connected to the ship's loading/unloading manifold by flexible or articulated arms.

Bulk solids are stored either outdoors (coal, iron ore), or in warehouses or silos in the case of putrescible• matter (e.g. grain). The goods are transported from the loading dock to the ship's tanks by conveyors. They are unloaded using large clamshell buckets, vertical elevators or suction systems fixed to cranes. 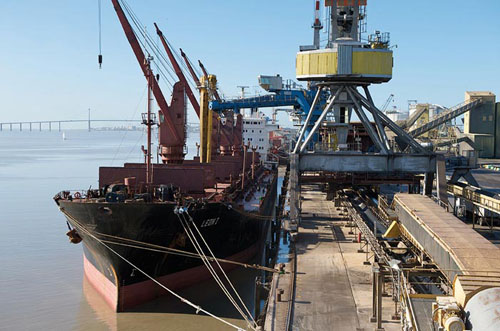 Containers• are loaded onto and unloaded from ships using specialized cranes designed to rapidly and accurately move the cargo. A dock equipped with four cranes can handle up to five million tonnes of goods a year. 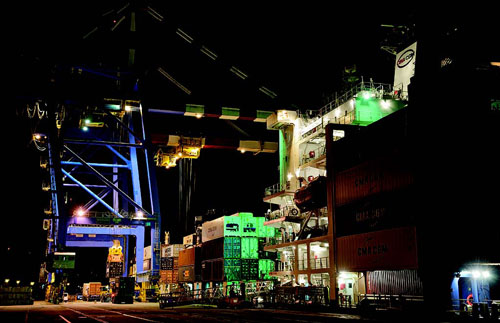